As part of the “Meet the Chef” initiative, recently introduced to Taste of Jordan, we were eager to interview Chef Yazan Abu Ghazaleh. It just so happens to our luck, the young chef is in Jordan for his spring vacation. When we asked to meet chef Yazan, he agreed, much to our delight and preferred to have the interview in his favorite location: Jabal Amman, were he is always inspired by the astonishing views of the surrounding city.

After preparing and cooking his dish, created exclusively for our interview, we took a drive through the streets of Jabal Amman. While getting to know the chef more, we ended up having a cup of green tea in one of the area’s many cafes.  It was not surprising at all when he informed me that as a kid, he always wanted to be a doctor, and being a chef was not really on his mind, though he loved being around in the kitchen helping out his parents. For Yazan, it all started at the age of eight, where he discovered what his next step in life would be.

By the year of 2006, Yazan had finally moved to another school to pursue his long life dream. He studied Hotel Management and was the 1st in his class, and the 2nd in the kingdom of Jordan. “I don’t draw any plans for the future, I just let it be”, was what he was telling me about how he applied to study at the Royal Academy of Culinary Arts in Amman. For Yazan, it seems that the Academy had opened its doors just for him to continue his education there. 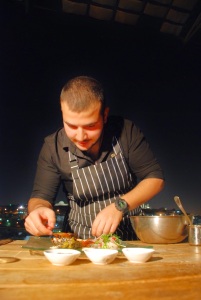 Just like any other chef, his ultimate dream is to have a place of his own, where he can cook and serve dishes that reflect his personality and character, and most importantly, his outstanding talent. His career started from being an intern at five starts hotels in Amman and Dubai, to being part of the opening team for the celebrity chef Marco Pierre White Dubai’s restaurant. Yazan now has moved to help opening another restaurant: Omnia by Silvena Rowe.

His passion for what he is doing, his wide imagination, his talent, and his ability to match flavors, has enabled him to be the winner of Matloob Chef TV Show. “I thought about corn, and the variety of textures and flavors it can add to a dish, and that was how it all started, and it ended up with my ‘Corn in a Field’ dish’.” His ability to combine different textures of corn in one dish: popcorn, polenta and baby corn served with chicken and black olive tapenade, has guaranteed the first place in that competition for the 22 year old chef.

“I love to spend my free time at Dubai’s largest libraries and I do spend hours at the cooking books section” Yazan added. He inspires his creations for his future dishes from cookbooks for Michelin stars and celebrity chefs such as his favourite George Calombaris and Huston Blumental. The Levant cuisine is his favorite, and he tries to uplift the standards of this cuisine and utilise its ingredients in unusual combinations. This passionate chef is a violinist as well. He caters for special and private events when the time allow for that, where he says that music allows him to express his character differently away from the kitchen.

Chef Yazan’s favorite ingredient is Halloumi cheese and he is a fan of the Jordanian Magloubih. His goal is to be creative and serve dishes that can be as exotic and ‘out of the box’ as they can be. Yazan enjoys most the plating of a dish, and in his opinion, it reflects how good the chef is and how he could use his imagination and turn it into reality, “Plate yourself, your character, and stand out among the crowd”, he adds. Yazan aims to build more understanding towards the culinary industry in Jordan and hopes that it will soon witness a revolution influencing the Jordanian culinary scene and the dining experience itself.

*Pictures courtesy of Yazan A.G and Taste of Jordan